Castor oil therapy consists of using a warm castor oil wrap over the abdomen in order to stimulate blood flow to this uterus and ovaries. Castor oil treatments are quite often recommended by holistic practitioners to treat many gynaecological disorders in women including fertility related problems, like endometriosis, fibroids, polycystic ovary syndrome, etc.

This type of treatment is very helpful in many cases to resolve infertility because the castor oil pack relieves congestion and inflammation of the uterus, ovaries, and fallopian tubes. Castor oil therapy increases circulation to the reproductive organs and helps detoxify the liver improving the metabolism of hormones. In these cases, castor oil is used by employing packs over the abdomen (Castor oil abdominal packs) covering both the uterus and liver. Castor oil is absorbed easily into the body through the skin and its healing components are delivered directly into the body tissues.

The benefits of castor oil are many. First of all, it removes the waste products from the cells and tissues where it is applied enhancing detoxification of the organs. Then, it decreases inflammation and assists the body in the removal of inflammatory components like prostaglandins. One of the main castor oil benefits is its ability to assist the liver eliminate excess hormones.

The most important function of the liver, as far as fertility is concerned, is to regulate blood sugar, and take part in hormone metabolism. Castor oil is also easily absorbed into the lymphatic circulation. Here, it stimulates the relaxation of the smooth muscle of the blood vessels allowing the free flow of oxygen and nutritional substances to reach the tissues more efficiently.

Furthermore, the relaxation of the smooth muscle of internal organs, such as the stomach, intestines, gall bladder and liver, and uterus is highly effective for pain relief as castor oil therapy reduces inflammation and excess congestion.


How Do Castor Oil Treatments Work?

Scientific studies have shown that castor oil treatments can boost the immune system by increasing the number of total lymphocyte count. This is another benefit of castor oil due to its ability to stimulate lymphatic drainage and removal of waste products from the tissue.

This is why a castor oil pack is often employed as a form of mild detoxification when applied over the liver, gall bladder and sp

Castor oil therapy can be effective in breaking up scar tissue and adhesions, in loosening up masses and in drawing out toxins from as deep as 8 cm. When dangerous toxins enter the blood stream, they can potentially cause free radical damage, inflammation, and DNA damage.

If the liver cannot detox efficiently, environmental chemicals are stored in the fat cells. This is one of the root causes of women's diseases like uterine fibroids, endometriosis, breast cysts, glucose imbalances, thyroid problems, etc. All of these conditions, as you can see, ultimately lead to infertility or fertility issues of some sort. Castor oil therapy that uses the application of a castor oil pack on the abdomen is a simple way to address all of these conditions at once.

The use of topical castor oil is very important when treating conditions related to poor drainage of the lymphatic system and congestion of organ tissues. The most important component of castor oil is ricinoleic acid, a fatty acid component which has the ability to draw toxins out of the tissues.


The following conditions respond to the application of castor oil packs:

When to Use A Castor Oil Pack

Duration of castor oil therapy: 45-90 minutes 3-5 times a week for at least 8-16 weeks. During the first two menstrual cycles the ovarian pain and menstrual discomfort should decrease. Taper off slowly by decreasing the number of session per week. Sometimes a longer period of time is required.

Do not apply a castor oil pack on broken skin, during menses and after ovulation if you are trying to conceive. If you are suffering from any serious or chronic condition, consult a natural health practitioner before applying castor oil. Do not use a castor oil pack if you are breastfeeding, pregnant or suspect to be pregnant. It is best to avoid castor oil treatments if you have uterine bleeding or suffer from cancerous tumors. Castor oil should not be taken internally. Because it causes severe abdominal spasms.

To make a castor oil pack you will need the following items:

b. Place the piece of plastic on top and then place the towel.
c. On top of the towel place the warm water bottle or the magic bag.
d. The pack should remain in place for at least one hour.
e. When you remove the pack, the remaining oil can be massaged into the skin or cleaned off using a clean flannel cloth.
f. Take it easy for a couple of hours after doing this castor oil wrap application.


Is A Castor Oil Pack Safe?

Castor oil has the ability to be absorbed by the skin to relax smooth muscle present in many organs like lymphatic vessels, uterus, fallopian tubes, bowels, gall bladder, and even the liver.

Castor oil therapy using packs is very safe. There are a few situations in which castor oil packs should not be used, like menstrual bleeding, acute stomach gas, serious intestinal conditions, on broken skin, and of course during pregnancy.

It is recommended to try castor oil packs for a few months before trying to conceive, just to be on the safe side because castor oil has a detox effect which moves all the toxins away from your organs.

After that you can apply castor oil packs only until ovulation, while trying to get pregnant. Do not take it orally because it is a strong laxative and can induce uterine contractions. As a practitioner, I do not recommend doing an herbal detox while doing castor oil treatments because the detox effect can be too strong. If you are on an herbal liver or bowel cleanse, do castor oil packs only once or twice a week.

It is not harmful to your body but you may experience detox symptoms that may make you fell unwell. These symptoms are transient and their duration depends on the level of toxicity of your body. If you do experience them, ease off on the frequency of the castor oil therapy sessions.

In my opinion there are a number of natural health therapies that work well with castor oil therapy because they help increase blood flow to the reproductive organs decreasing uterine and ovarian congestion. They are yoga, massage therapy and nutrition. Castor oil pack work really well in conjunction with self fertility massage.


What is a Castor Oil Pack?

A Castor Oil Pack is a cloth soaked in castor oil which is placed on the skin to enhance circulation and promote healing of the tissues and organs underneath the skin.


What can a Castor Oil pack be used for?

When it comes to fertility Castor Oil packs are great for women who are experiencing:


How to Use a castor oil pack

Soak the flannel cloth that is contained in the kit with castor oil and place it on the skin. Cover the flannel with a sheet of plastic, and then a how water bottle or heating pack is placed over the plastic to heat the pack. Cover everything with a towel and relax.
The best place to place a castor oil pack for fertility issues if over the lower abdomen.
Precautions: Castor oil should not be taken internally. It should not be applied to broken skin. It should not be used during pregnancy, breastfeeding, or during menstruation.


How to prepare your Castor Oil Pack 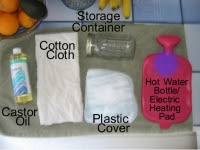 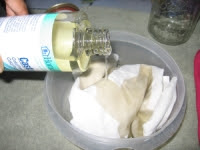 1. Place the flannel in the container. Soak it in castor oil so that it is saturated, but not dripping.
2. Place the pack over the affected body part.
3. Cover with plastic.
4. Place the hot water bottle over the pack. Leave it on for 45-60 minutes. Rest while the pack is in place.
5. After removing the pack, cleanse the area with a dilute solution of water and baking soda.
6. Store the pack in the covered container in the refrigerator. Each pack may be reused up to 25-30 times.
Posted by hamidarshat at 12:31 AM